Ukraine is one of 45 participants in this year’s world’s largest green business ideas competition — ClimateLaunchpad. The country has also became one of the 10 countries with the largest number of participating startups. Out of initial 55 applicants to the context, 9 teams made it to the national final. These teams presented their green business ideas to the jury, who selected the winners — UGrid, TOKA, Stock-Factory — to represent Ukraine at the Global Grand Final in Edinburgh, Scotland.

ClimateLaunchpad is the world’s largest green business ideas competition. Its mission is to unlock the world’s entrepreneurial cleantech potential to address climate change issue. This competition sets up a stage for those green ideas propelling them towards real business that makes a difference and creates green economy. ClimateLaunchpad is part of the Entrepreneurship offerings of EIT Climate-KIC, its partner in Ukraine is NGO Greencubator. 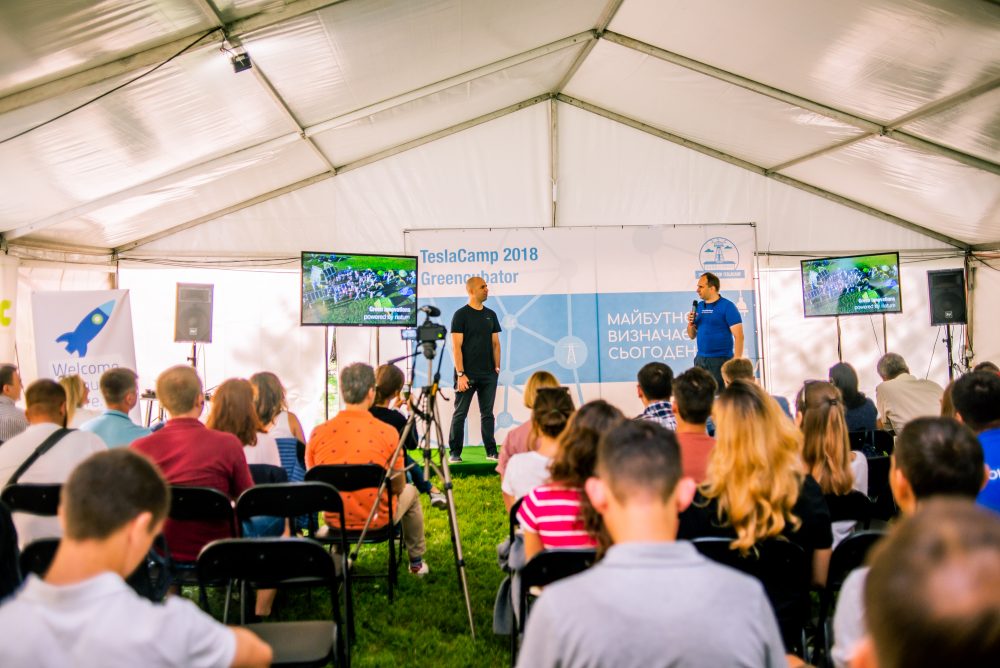 ClimateLaunchpad Ukrainian national final took place at the TeslaCamp. That is an open-air renewables-powered energy innovations camp, organized by NGO Greencubator, dedicated to the future of energy markets. With its own renewables-powered (solar and biomass) microgrid, no-plastics catering and live cleantech demo zone TeslaCamp provided an ideal low-carbon location for Climate Launchpad. And the fact that the whole camp was located at cozy and green part of Dnipro river bank added some special vibes to the event. 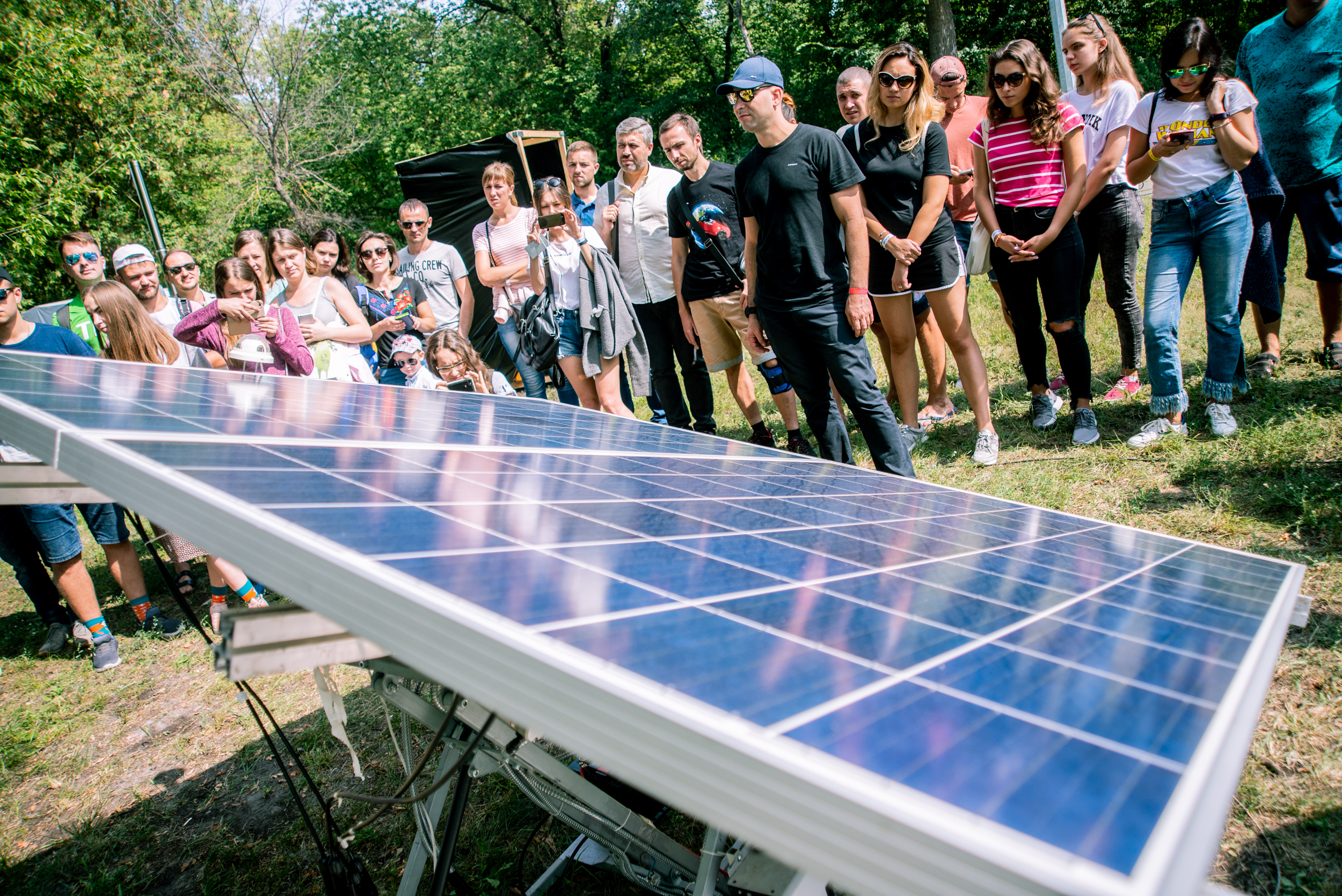 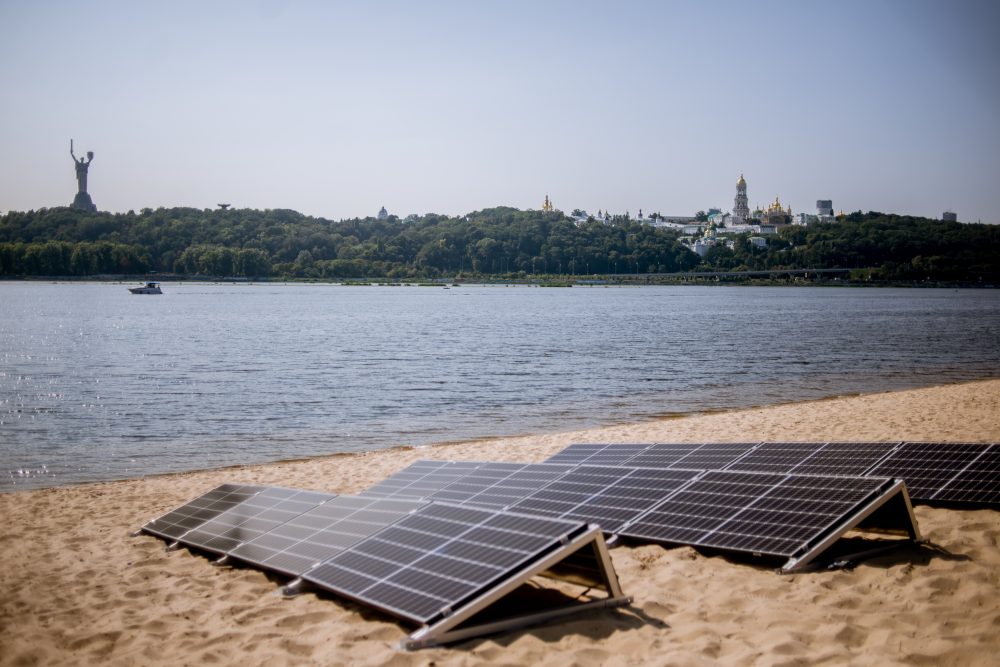 The jury at the Climate Launchpad included some prominent Ukrainian experts in the field of renewable energy and sustainable business. All of them have practical experience in fostering the climate-friendly businesses: 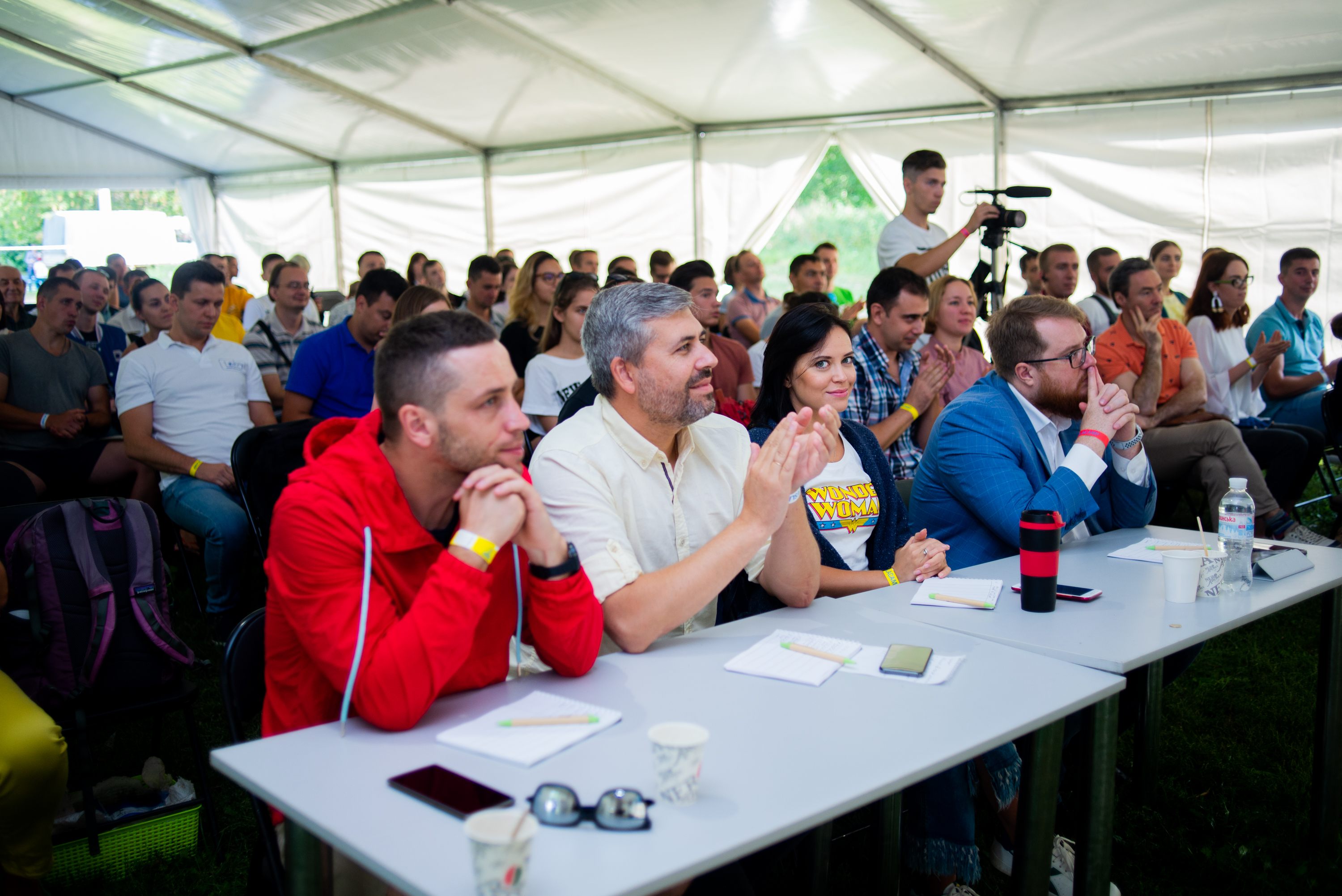 «— Ukraine Venture Capital and Private Equity Association stays with the ClimateLaunchpad in Ukraine for the third year in a row, so I’d like to highlight two main points. First, the rising quality of startups themselves: their pitches are getting better, business models are getting more complex. No more obvious leaders to beat the rest of the finalists — all participants are good enough, so it isn’t easy to choose the winners. And the second point, I’d like to focus on, as an Ambassador for women from Ukraine at venture business in Europe: the number of women among founders and co-founders is getting bigger every year. Women represented at least half of today’s projects and that is a very good trend.»

And the winner is…

Climate innovation is possible in any sector of the economy and often comes from in form of very diverse business models. And this year’s Ukrainian ClimateLaunchpad winners are just like that. Three teams to represent Ukraine at the Global Grand Final in Edinburgh belong to completely different cleantech markets: microgrids and virtual power plants; e-vehicles infrastructure; optimization of market places and product loss reduction. 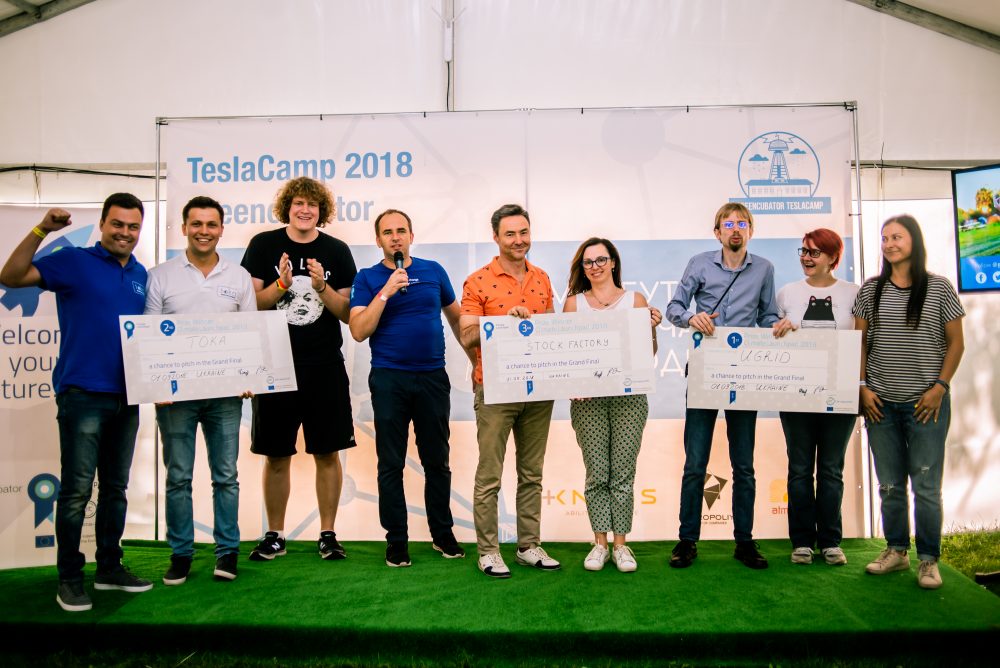 So meet the winners! The third place was awarded to Stock-Factory. It is a smart platform for manufacturers, retailers which helps them with selling the unsold stock of quality goods or passing it on to the charity. This will help to reduce the amount of wasted/destroyed goods in the trading chain and improve logistics, thereby reducing the carbon footprint and volumes of waste. 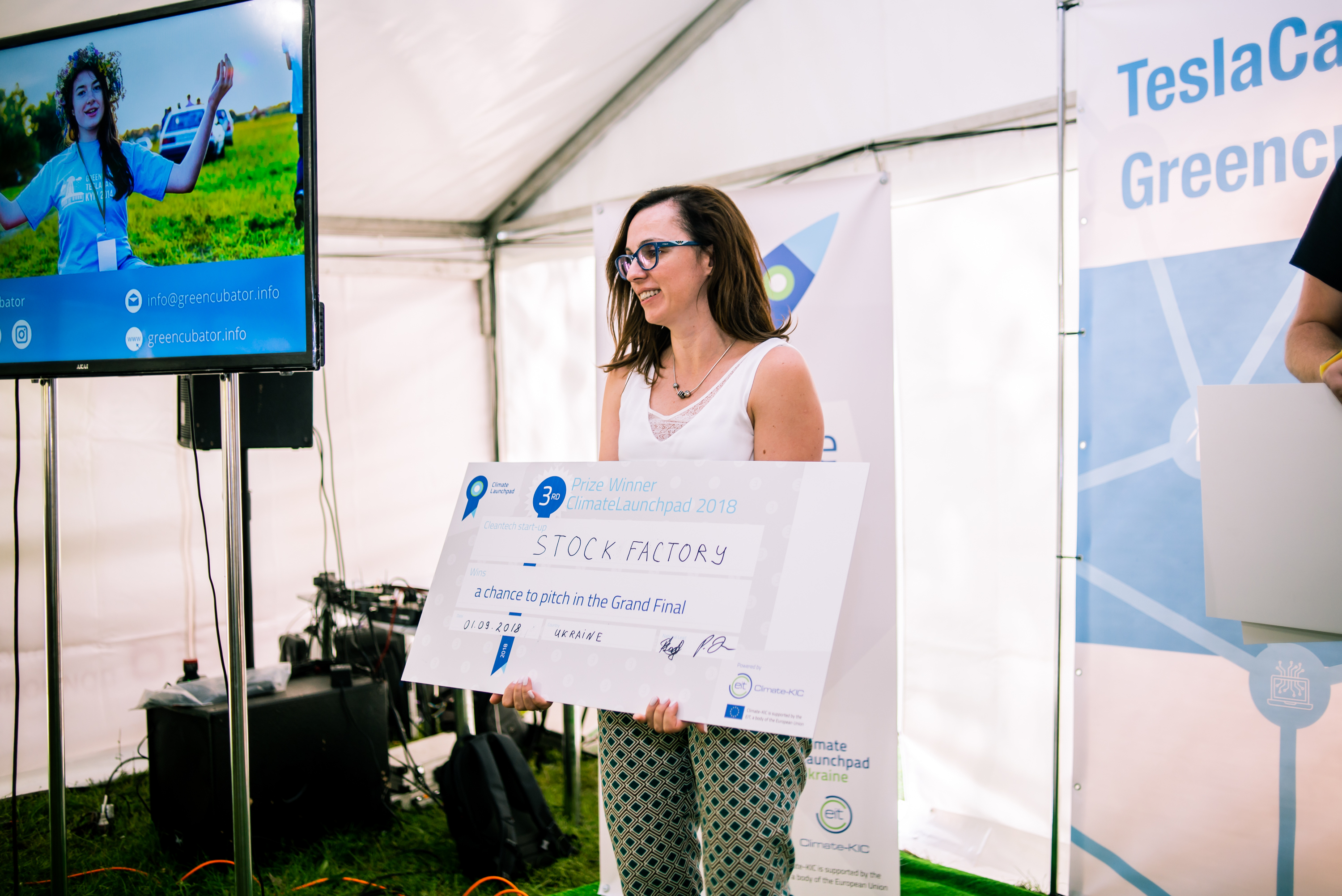 TOKA, a company which builds charging stations network for electric vehicles won the 2nd place of the competition. The team managed to develop smart balancing energy system. TOKA aims to create an e-charging point that’d be handy for night-time charging for both residents and builders of new houses. The bigger amount of convenient charging stations might convince urban citizens to switch to e-cars, and that is what TOKA team hopes to get as a result of their project implementation. 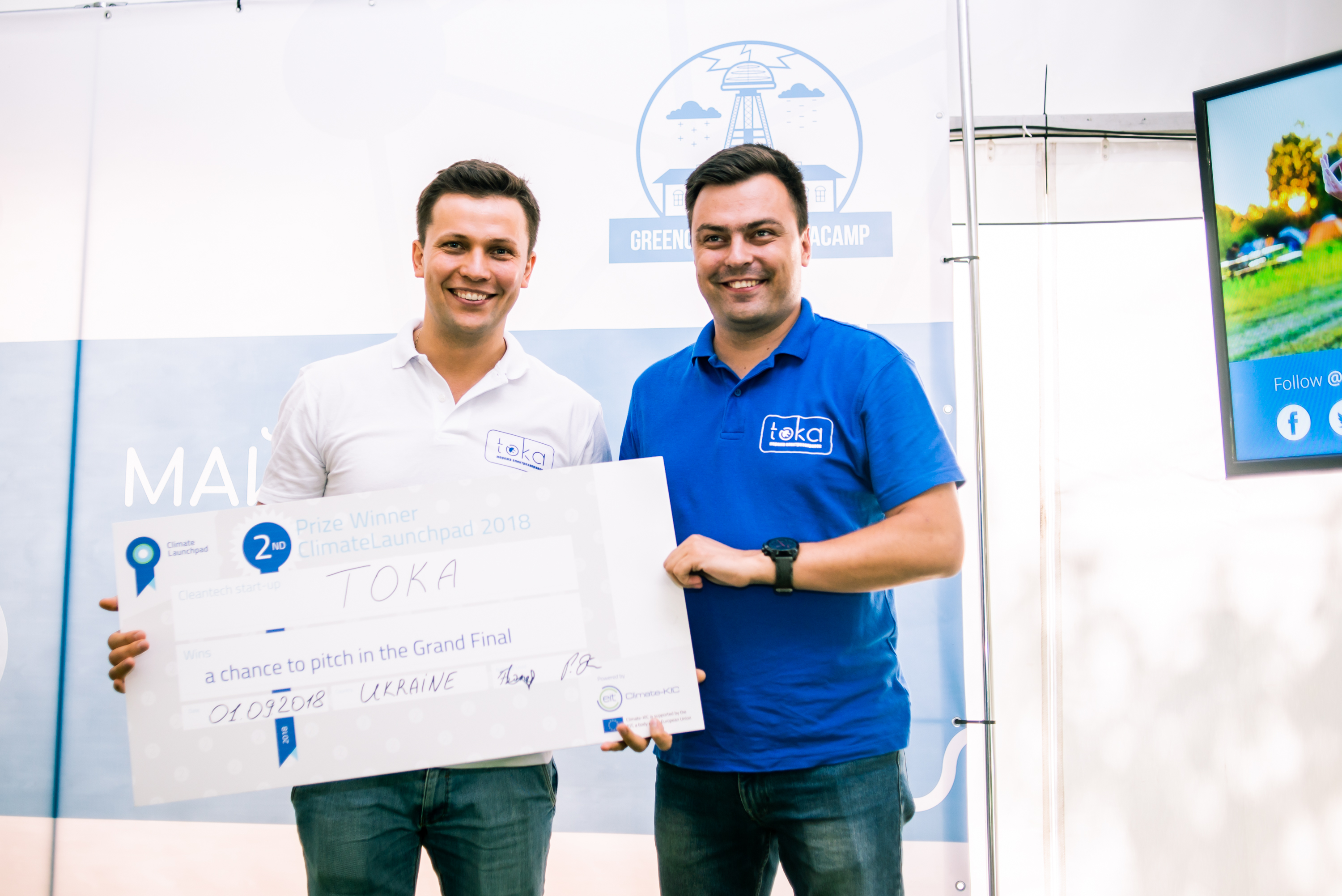 Developers of a next version of a better electric grid — UGrid team have won the first place of Ukraine’s National CLP final. A team of five works on a hardware and software solution for deploying a microgrid based on traditional energy grids. Users of this distributed sustainable power plants will get convenient tools for managing and controlling power consumption, and will be able to charge their devices and gadgets in the most efficient way. Also for better control and prediction of energy use UGrid gives tools to create virtual power stations with distributed energy resources. This technology combines microinverters, IoT-controllers and cloud-based software. UGrid’s solution is handy for local energy supplying organizations who struggle to reduce the use of fossil energy sources and avoid overpayments during peak periods. 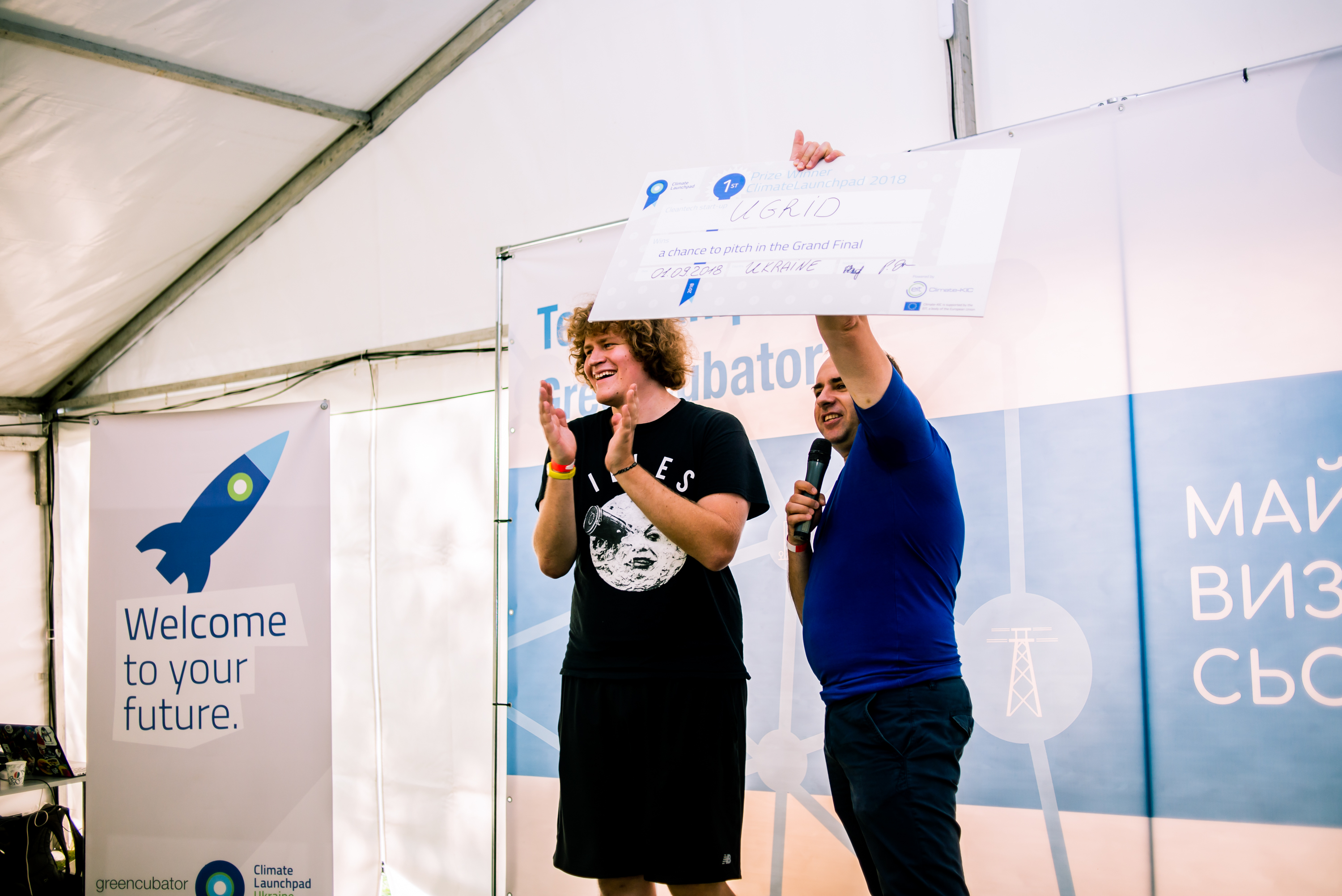 UGrid founder Pavlo Repalo says that team is going to focus on testing key features of the solution, as well as creating a better demo equipment and, of course — better pitches and market insignts:

«— ClimateLaunchpad has helped us to sharpen up the business model, understand what market we should aim at. Also, we’ve developed a persuading presentation materials database, as well as figured out new convincing arguments for our clients and investors. In fact, we’ve seen more opportunities for our project and thus we’ve become even more inspired to work further on. Special thanks to our mentors for this!» 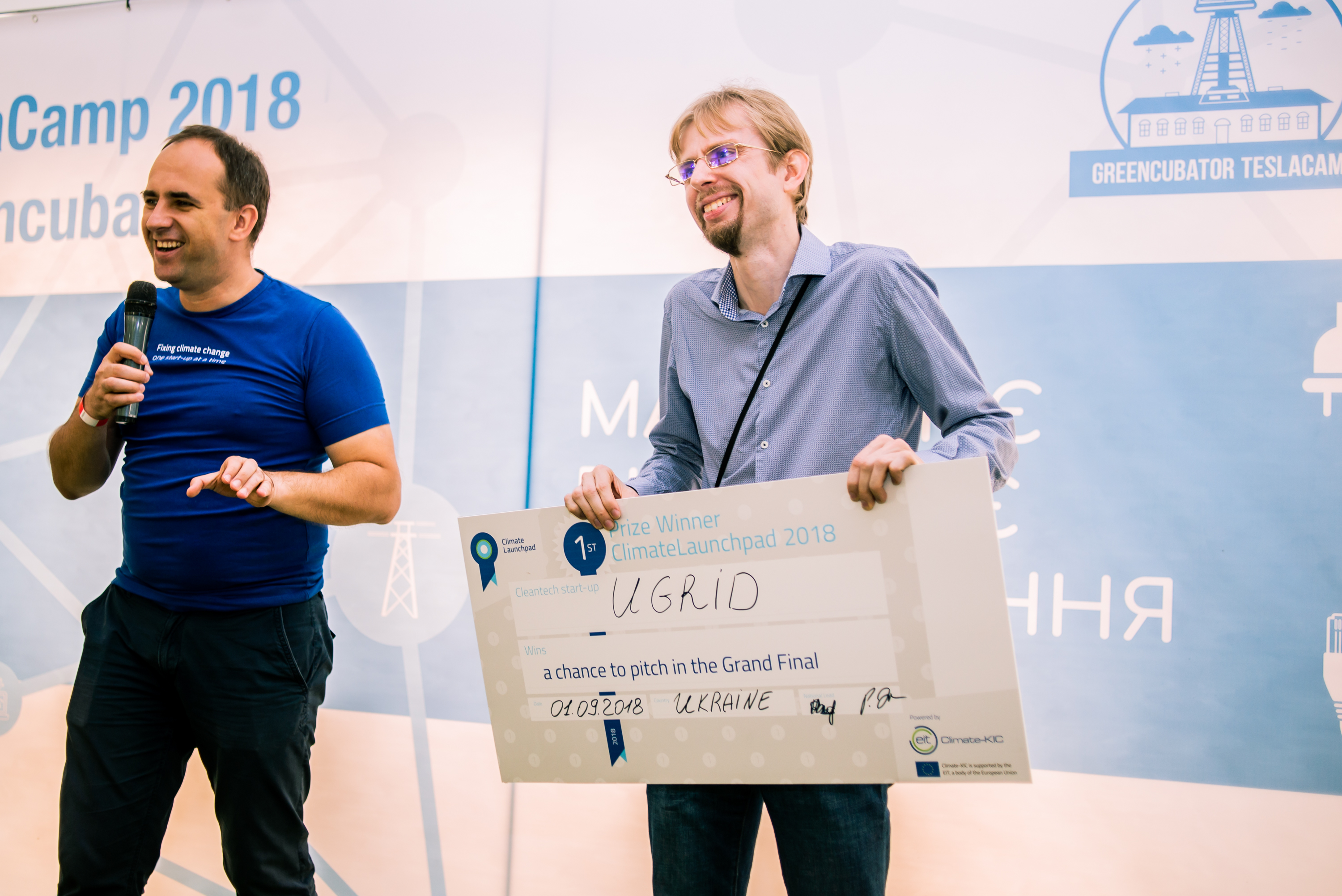 Pavlo Repalo, UGrid, with the 1st place prize at the National Final ClimateLaunchpad

Ukrainian teams have been participating in the world’s largest green business idea competition since 2016, thanks to Greencubator — NGO behind organizing national final stage. The NGO is a leading supporter the climate innovation ecosystem in Ukraine. Every year three winners from each country compete at the Global Grand Final to join the Climate-KIC accelerator and get a cash prize. Last year Ukrainian start-up Go To-U was named among the TOP-10 world’s best green startups at CLP final on Cyprus. Another Ukrainian 2017 winner — Effa with its alternative to plastic disposable toothbrushes, is working on arranging delivery of its product to businesses. Its toothbrushes made of recycled paper soon to be used in Ukrainian and foreign hotels, in particular, in the United States. On November 1-2, 2018, the next generation of green Ukrainian innovators will present their ideas to global leaders of cleantech industry. Fingers crossed for UGrid, TOKA, Stock-Factory! Their success is a win-win for all of us, as they will compete not only with other teams to get an investment, but also with climate change to get a better future for our beautiful blue-green planet.

Contact us to get additional information about the winners phone: +38 044 374 17 17 or email julia@greencubator.info (Julia Fedotovskykh). Follow Greencubator updates to find out when the next competition begins. It it scheduled to February, 2019

And here are some more photos of happy winners: 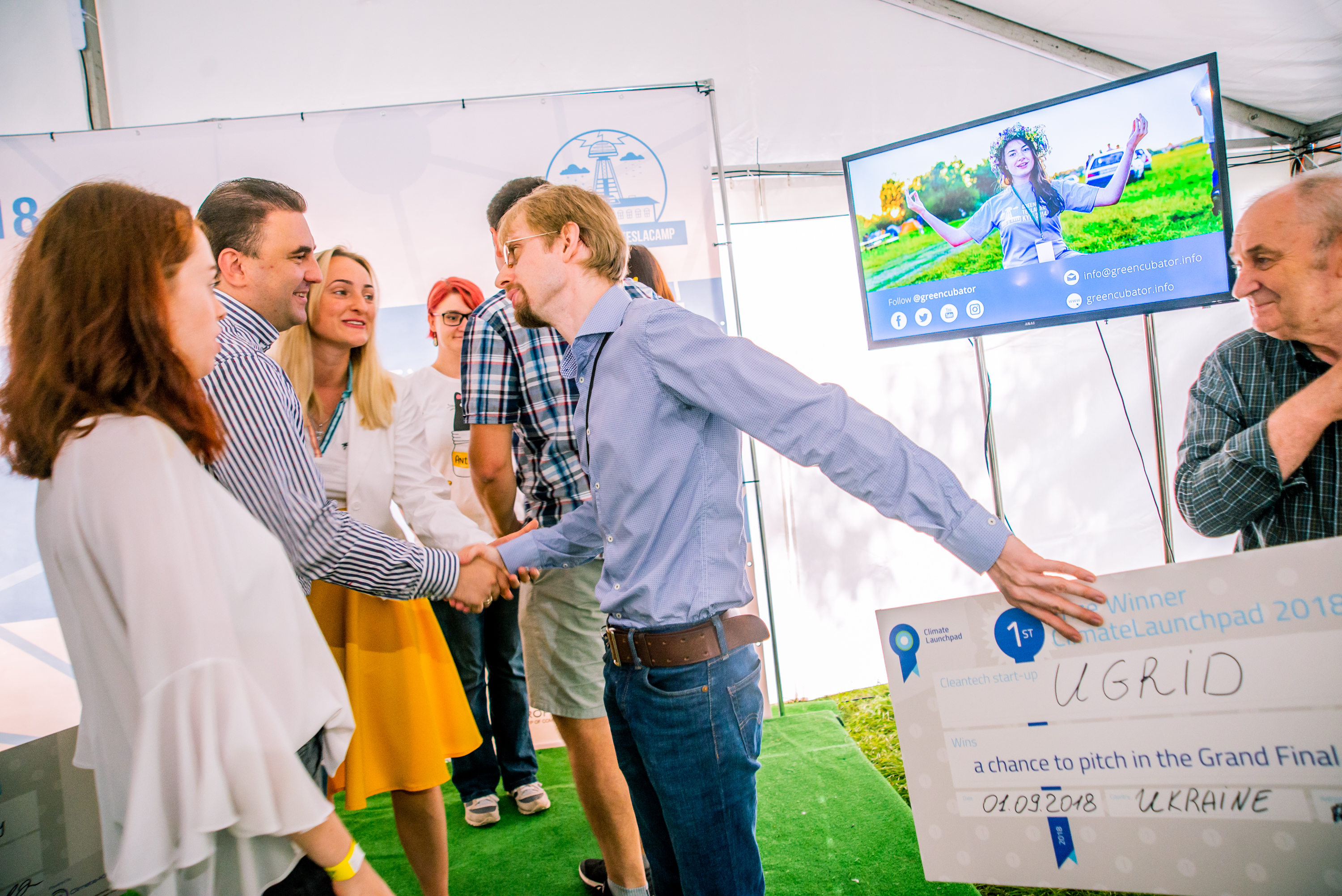 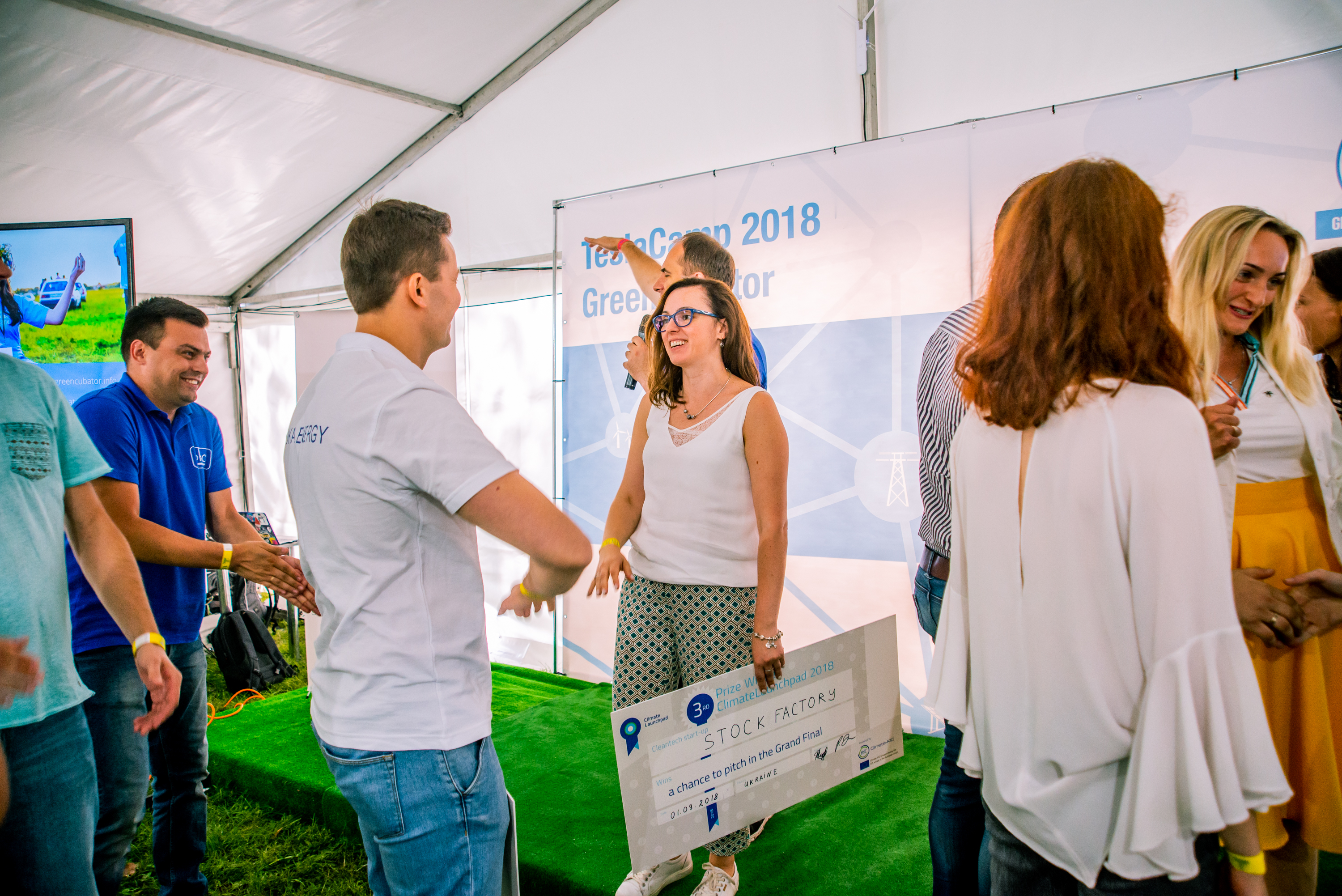 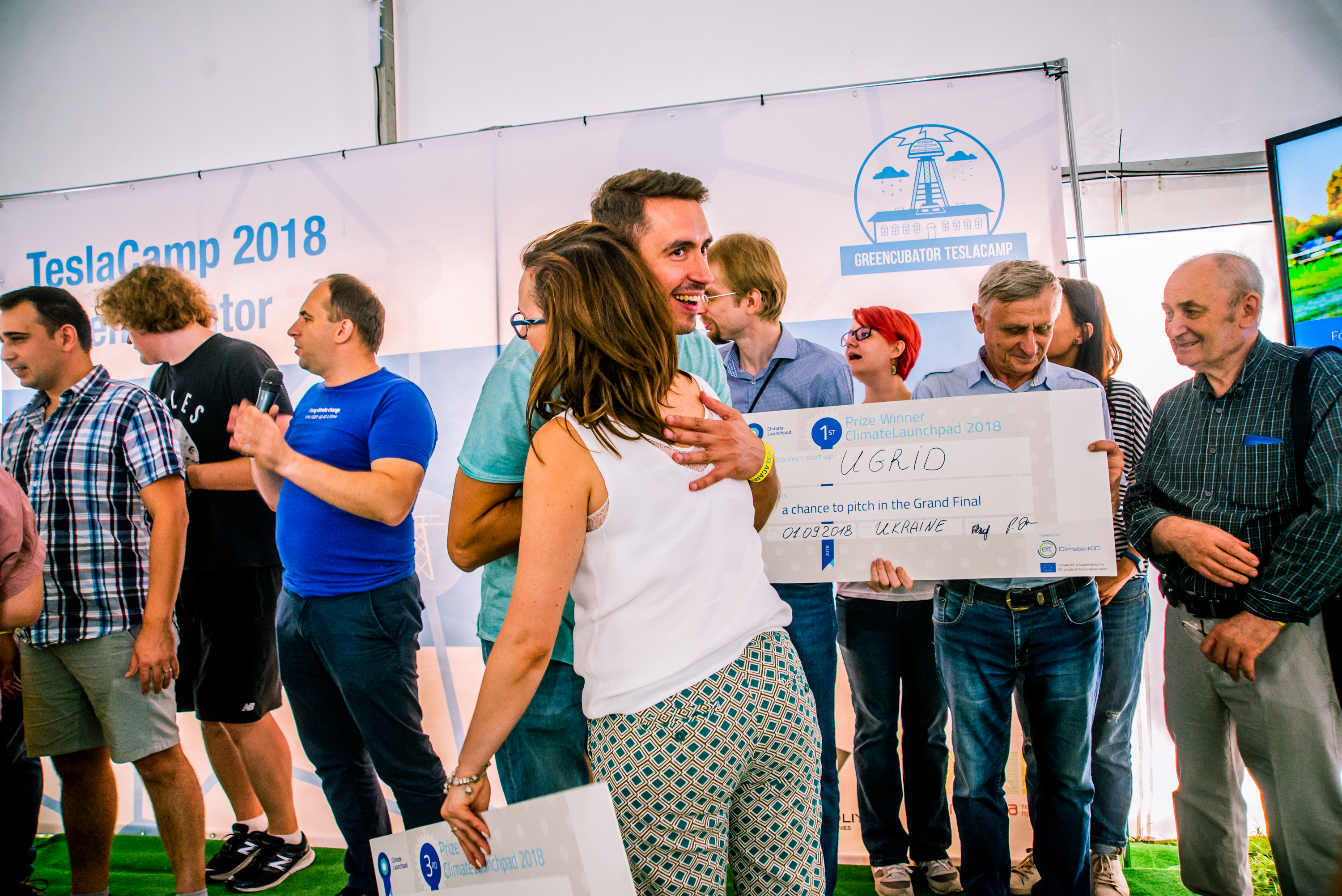 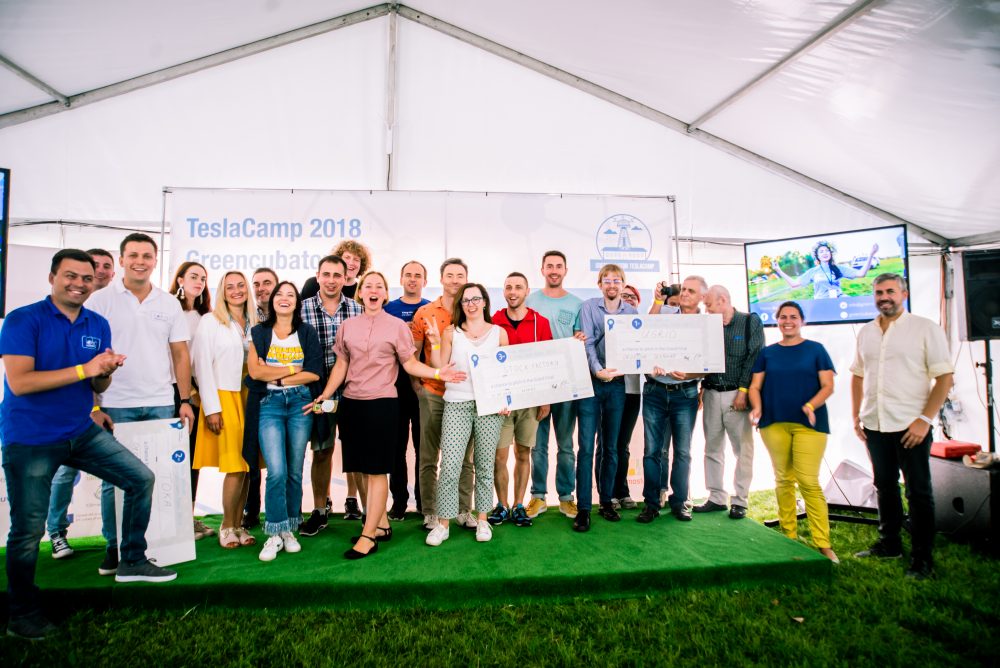